Some years ago I stumbled upon the series of wargame rules "1870", "1859" and "1866". The period soon caught me: There are plenty of well researched scenarios, the armies are the last truly colourful Western armies of History, and the variety is never ending. Within a small span of 11 years there are plenty of interesting armies to paint and play.
I started with Austrians and Prussians, and my first French are not very far away (and I have the eye on upcoming Italian ranges). Here you have a photographic report of my first battle test using "1866". Well, as a matter of fact, I am using the latest official version of the system rules, also named 1870-Lite, which streamlines the use of several tables without losing tactical detail. This series of rules was primarily intended for wargaming in 6mm and 10mm, but I find that 28mm plays just perfect, and with no change in the game scale! What matters is that each base is around 30mm wide.. and that´s it. Depending on the scale you choose to play each particular game, one base can represent 1 batallion, half-batallion or about 1/4 batallion. You just play with the official distances for each game-scale. Here you can see 1 Austrian brigade (6 infantry batallions + 1 jaegers batallion), plus 1 regiment of 3 batallions and a second jaeger batallion, preparing to defend a ridge against a similar sized Prussian force that is coming out of a wood. I am sorry I don´t have artillery yet, and the Austrians are going to miss it very much... 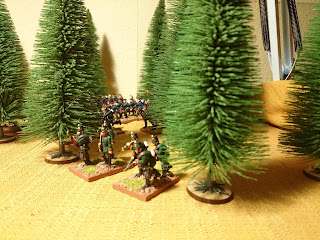 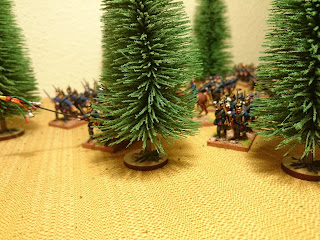 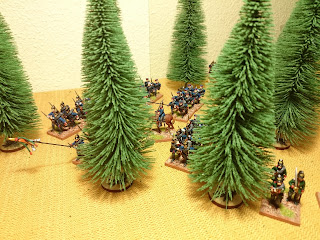 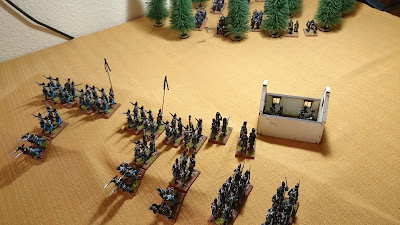 As you can see, my austrian standards have yet to be painted and flags posted. On the other hand, the Prussian standards you can see ARE finished: The old flags of some regiments were simply vanished with the years. 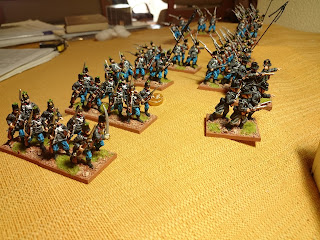 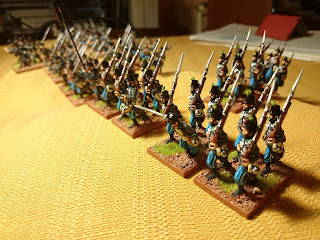 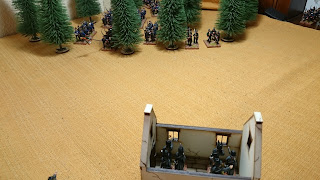 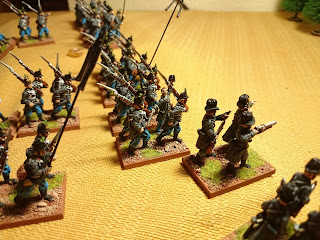 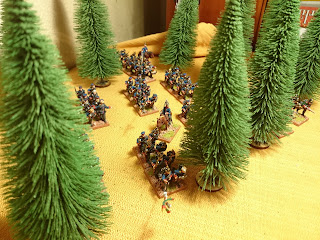 It was just a first try, but the rules worked great: They have a lot of tactical nuances, they illustrate well all the differences between different troop types, weapons, command (including doctrine) and nationalities, but everything using a quite moderate amount of modifiers. The rules are not the best written for clarity (reading all the errata and designer´s Q&A is a sine quanon), but once you take the grasp of them they are fast, historic and fun. The following pic was taken at a very advanced stage of the game. At the end, both sides morale gave in simultaneously: The austrian command gave the order to retreat, while at the same time the prussian command gave the order to stop the attack. Austrian losses were about 50% higher than those from the enemy, even if they were on the deffensive, but that is to be expected when you fight with Austrians without artillery support against those needlegun armed devils. 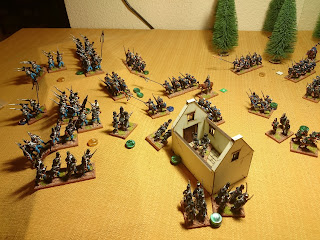